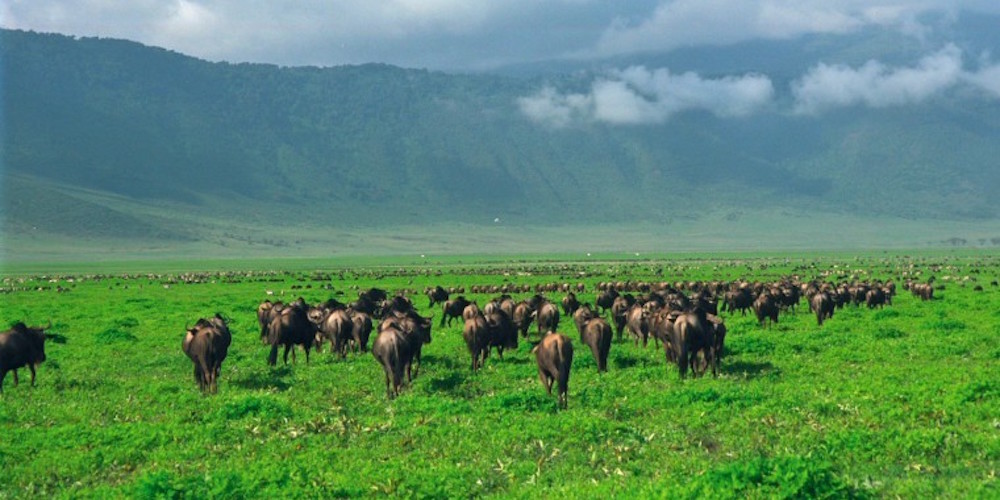 Nearly three million years ago Ngorongoro towered alongside Mount Kilimanjaro as one of the highest peaks in Africa. Forged during the tumultuous birth of the Rift Valley, its volcanic top erupted at the time that ancient man first walked the plains.

The Ngorongoro Conservation Area (NCA) covers some 8,300 square kilometres. It boasts the finest blend of landscapes, wildlife, people and archaeological sites in Africa. It is also a pioneering experiment in multiple land use. The concept of multiple land use in conservation perspective is a deviation from a traditional approach of regarding conservation as complete absenteeism of human interference.

Rifts and volcanoes shape the landscape of Ngorongoro. A rift is a disturbance in the earth’s crust, which causes rise or falls of its borders. Rifts also cause lava or melted rock to penetrate to the surface where it then hardens. If lava emerges from the same penetration for a long period, it builds up into a volcano.

In the Ngorongoro Conservation Area, the main rifts are north of Lake Eyasi and east of Lakes Manyara and Lake Natron, where the nine volcanoes of Ngorongoro highlands were formed during the past four million years. Of these, only Oldonyo Lengai(mountain to the Maasai God) is still active. The ash and dust from the eruptions was carried by the wind to form the fertile soils of the Serengeti plains.

Today, Ngorongoro's caldera shelters the most beautiful wildlife haven on earth. The rich pasture and permanent water of the Crater floor supports a resident population of some 20,000 to 25,000 mammals. They are not confined by the Crater walls, and can leave freely; they stay because conditions are favourable. Since most of the Crater floor is grassland, grazing animals predominate: gnu, zebra, gazelles, buffalo, eland and kongoni (Coke's hartebeest) and warthogs. The swamp and forest provide additional resources for hippos, some of Tanzania's last remaining black rhinos, giant-tusked elephants, waterbucks, reedbucks and bushbucks, baboons and vervets. The steep inner slopes provide a habitat for dikdiks and the rare mountain reedbuck. Towering euphorbias cling to the crater walls and on the floor, Fever tree and Fig tree forests give shade to an awe-inspiring array of creatures. All these animals in turn support large predators such as lion and leopard, and scavengers such as hyena and jackals.

For the best viewing and photography, approach the animals slowly and quietly and do stay on the official tracks. Ngorongoro must be testament to man’s ability to conserve so future generations can experience what you can now.

What you can see of birdlife depends greatly on the season of the year, because there are resident birds and migrant birds. You are certain to see many residents, like ostriches, bustards and plovers all year round. In wet season they share the crater with European migrants such as White Storks, Yellow Wagtails, swallows, etc. The migrants pass through from November through May, coinciding with the rains in Africa and the winter in Eurasia. There are also local migrants such as flamingos, storks and ducks which come and go depending on the state of the lake and ponds. Other birds you can see are Stonechat, Anteater Chat, Schalow's Wheatear, Fiscal Shrike. Augur Buzzards, Verreaux's Eagle and other raptors all live in the Crater.

Ngorongoro safari lodges are situated on the rim of the crater, which is 2,235 metres (7,264 feet) above sea level. It can get quite fresh up here, and gets very cold at night in the winter months of June to August, however down on the crater floor it can be hot during the day.

The weather is usually dry from June to November. July is the coldest month and highland temperatures may fall below freezing.

It rains anytime from November to May, with the longer rains in April to May. The amount and pattern of rainfall varies and a dry period in January and February may split the rainy season into short and long rains. The forested eastern slopes get much more rain due to their elevation than the arid country to the west. The rain arrives in stormy showers usually during afternoons and nights, which cleanses the air to reveal clear views.

Interpretive game drives through the emerald plains and forests of the crater floor engender guests with a respect for the people and wildlife of this world wonder.

A sheer dirt road descends from Malanja Depression on the crater rim to the crater floor. At the top of the road, Maasai women and children allow you to photograph them for a small fee. The Malanja depression is grassy and open and is a good place to spot typical highland antelope such as mountain reedbuck and Kirks dik-dik, and birds such as the striking auger buzzard and Schalows wheatear. The dominant feature of the crater floor is Lake Magadi, a shallow soda lake that supports large flocks of flamingo. Much of the crater floor is open grassland, making animal spotting relatively easy: black rhino, lion, hyena, gazelle, wildebeest and zebra are all commonly seen. The hippo pool near Mandusi Swamp is a popular picnic spot.