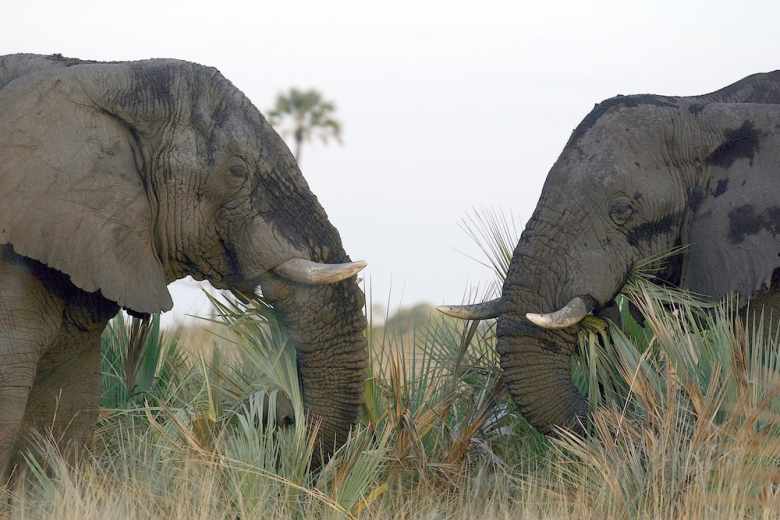 August 2008. A study by the Wildlife Conservation Society and the Zoological Society of London (ZSL) suggests that old female elephants, and perhaps their memories of distant, life-sustaining sources of food and water, may be the key to survival during the worst of times.

In particular, experienced elephant matriarchs seem to give their family groups an edge in the struggle for survival in periods of famine and drought, according to a recently published paper in The Royal Society's Biology Letters.

"Understanding how elephants and other animal populations react to droughts will be a central component of wildlife management and conservation," said Wildlife Conservation Society researcher Dr. Charles Foley, lead author of the study. "Our findings seem to support the hypothesis that older females with knowledge of distant resources become crucial to the survival of herds during periods of extreme climatic events."

Dr Nathalie Pettorelli, ZSL researcher and co-author, added, "Climate change is expected to lead to a higher occurrence of severe drought in Africa and our study suggests that such extreme climatic events may act as a selection force on animal populations. As animals battle to cope certain individuals, such as these grand dames of the elephant kingdom, might become increasingly important."

Specifically, the study examines patterns of calf mortality during the drought of 1993 in Tanzania's Tarangire National Park, the most severe drought in that region in the past 35 years. During a nine-month period of that year, sixteen out of 81 elephant calves in the three groups studied died, a mortality rate of 20 percent. The normal mortality rate of calves during non-drought years is a mere two percent.

When compared with other data, researchers noted correlations in calf survivorship with the movements of the groups and, in particular, the ages of the female members within those groups. First, of the three elephant groups observed during the event, the two groups that left the park suffered lower mortality rates than the group that remained in the northern portion of the protected area. The researchers speculated that these elephants succeeded in finding sufficient food and water outside the protected area to keep themselves and their young alive. The group that stayed suffered 63 percent of the mortality for the year.

Second, an examination of the ages of the individual elephants in the three herds was even more suggestive. The data indicated that the age of the mother elephants was an important predictor for calf survival. The two groups that left the park, presumably in search of food and water, had matriarchs that were ages 45 and 38 years of age respectively, whereas the group that remained had a matriarch that was only 33 years of age, the result of heavy poaching during the 1970's and 1980's that targeted older females with large tusks.

Third, the researchers pointed out that the groups that left the park may have benefited from the specific experiences of their oldest matriarchs, which perhaps were able to draw upon memories of an earlier drought and how they survived it. The case is strengthened by the known life history of the oldest matriarchs in these groups, some of which were five years or older during the drought of 1958-61. The group that remained with Tarangire in 1993 had no individuals old enough to remember the event.

"It's enticing to think that these old females and their memories of previous periods of trauma and survival would have meant all the difference," added Foley. "The data seem to support the speculation that the matriarchs with the necessary experience of such events were able to lead their groups to drought refugia."

During the 1970s and ‘80s, many of Eastern Africa's largest elephants fell victim to waves of poachers who were eager to exploit the profitability of the black market for ivory.

"Hopefully, this study underlines the importance of how crucial older matriarchs are to the health of elephant populations," added Foley. "Protecting the leaders of elephant herds will be even more important in what may be an increase in droughts due to climate change."

More in this category: Peak of Mawenzi »
back to top